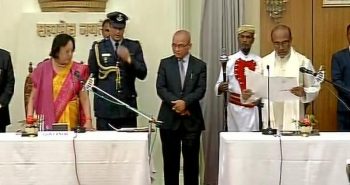 It was a historic moment for the BJP on Wednesday, when party leader Nongthombam Biren Singh took oath as the Chief Minister of Manipur. This is the first time that BJP has come to power in the state, which had been a Congress bastion. A floor test awaits them.

BJP had won 21 seats and made a bid for power claiming it has the support of 33 legislators in the 60-member assembly.

A national level football player-turned-journalist, Biren Singh was key member of the Congress party when he decided to join BJP in October 2016. Singh started his political journey with a regional Democratic Revolutionary People’s Party in 2002.

Manipur Governor Najma Heptulla on Tuesday invited Singh, who was unanimously elected the leader of the 21-member BJP legislature party on Monday, to form the government.

The Congress had emerged as the largest party in the state winning 28 seats, but the party fell short of majority.

Prime Minister Narendra Modi congratulated Biren Singh after he was sworn in and expressed confidence that his team will work tirelessly for the state’s development.

“Congratulations to Shri N Biren Singh and his team on taking oath. I am sure this team will work tirelessly towards Manipur’s development,” Modi tweeted.

BJP chief Amit Shah and Union Minister Venkaiah Naidu were to attend the swearing-in ceremony, but their plane to Imphal had to return to Delhi after it developed technical snags in the engine.

The trip was shelved after the aircraft returned, and the two leaders had to give the function a miss.