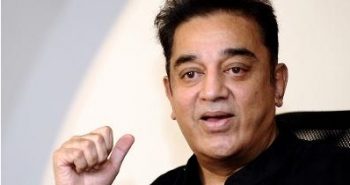 They live less than 3km from each other in Chennai. But that gap is threatening to get as tense as 3km on either side of the border of two hostile nations.

Matinee idol Kamal Haasan and Subramanian Swamy continued to engage in a proxy war on social networking service Twitter+ on Monday, with the BJP Rajya Sabha MP saying he would oppose any move by Haasan to enter politics and lead the people of Tamil Nadu.

The two have been taking potshots at each other amid a flurry of tweets on recent political developments in Tamil Nadu.

Swamy’s tweet on Monday was in reply to a question from a user who asked him if the BJP would welcome Kamal to lead Tamil Nadu if that was the wish of the people.

Swamy replied: “I don’t know about BJP but I will oppose this boneless wonder+ and pompous i***t called Kamal Haasan.”

Haasan responded with two tweets. “I have one bone of contention. It’s good enough. Su. Sa called Tamils p****ys. Glad I won’t have to oppose him. People will.”

Kamal said he wouldn’t retort with rudeness and that Swamy’s experience in ‘acidic political exchanges’ was more than his. “He might like his meal boneless. I don’t. Bon appetit sir,” he said in a second tweet. Both tweets were retweeted by close to 2,000 Twitter users.

Kamal on February 18 tweeted a link to a speech by former Supreme Court judge Markandey Katju: “Ppl. who hide behind constitution while they hide explosive truths will only implode e.g. su..samy.”