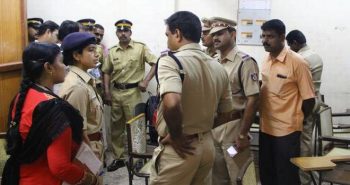 In Kerala ,a boy doused himself in petrol and the girl he courted and set her on fire in their classroom at the School of Medical Education.(SME).  The deceased Adarsh(25) is a 2009 batch student of the Bachelor of Physiotherapy programme in Kollam district.  The victim is Lakshmi,a 21 year old student of the same programme.  The director of the Gandhinagar campus of SME Mr.Regi Ram said Adarsh, who had to appear for a supplementary examination on Wednesday, came into the girl’s classroom during the mid day break and wanted her to have a private talk.  But the girl refused.  The boy was however persistent with his tortures.  The boy went out and returned with a petrol can and he poured over himself.  The shocked girl went out and hid in a library.  But the boy chased her and spotted her in the library and poured petrol.  When the other students raised  he threatened them.  The boy immediately used a lighter and set ablaze.  They were rushed to Government Medical college and hospital.   According to R.P. Renjin, resident medical officer (RMO) at the hospital, the boy had suffered 80% burns and the girl 65%.  “They both had suffered deep burns,” Dr. Renjin said.