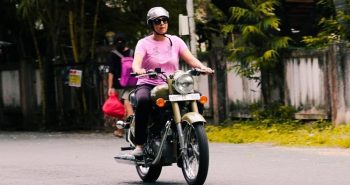 Kutram kadidhal movie director G.Brhamma’s next film is “magalir Mattum” , which is going to be produced by Surya’s 2D entertainment, jyothika is the all-rounder of the movie, along with her actors like Livingston, saranya, oorvasi, banu priya will also join in this movie.

This movie is completely a heroine based subject, story of the movie  will increase the courage and self-confidence of ladies and girls, and also a film which will speak about female rights, jyothika is acting and doing things which girls won’t usually do or they hesitate to do.

Usually girls will ride scooter only but in this movie jyothiks is riding a bullet, “for this surya had teacher her to ride a bullet for one week”, in the whole film she’s coming around in the bullet so after a proper training only she came for shooting.