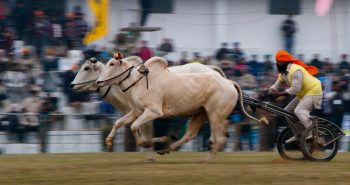 After three decades, bullock cart racing competitions were held during Nagoba Jatara, which is the second biggest festival of tribal. It was held in Keslapur village of Indravelli mandal in Adilabad district on Sunday.

The bullock cart racing was considered as a major event during the Jatara but was stopped in 1987 over law and order problems and other issues. However, inspired by the recent jallikattu controversy, bullock cart race has been revived with people from Adilabad and neighbouring districts witnessing the race with keen interest.

‘‘We drew inspiration from Tamilians who agitated against the move to stop their traditional game. No cruelty to animal was involved in our game either,’’ said by an event organizer.