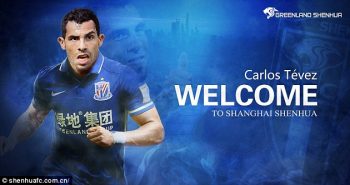 Carlos Tevez became the latest high-profile international player to join the Chinese Super League when Shanghai Shenhua confirmed the signing of the Argentine striker from his boyhood club Boca Juniors on Thursday.

The striker, who returned to his boyhood side in the summer of last year, scored 25 goals in 56 matches in his second spell at Boca, winning Argentina’s Primera Division and the Copa Argentina.

It did not put a value on the transaction, but Argentine media previously reported Tevez would make $84 million over two years under the contract — 20 times his previous earnings.