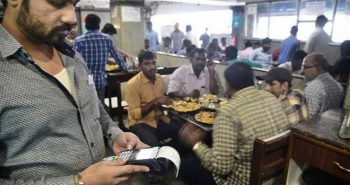 In Hyderabad the Irani café which had waiters with money in their palms no more need to have money due to demonetisation of Rs.500 and Rs.1000 currency.  Many Iranicafes have moved on to card transactions,thanks to the cash crunch and its effect on their business.  These Iranicafes serve breakfast ,lunch and dinner beside the millions of cups of sweetened  milk chai and Osmania biscuits.  “Yes, we are planning to move to card-based transactions.  We were already accepting card transactions in the Banjara Hills branch.  We will soon start accepting card based deals in our main restaurant in the old city,” said Muhammad Omer Adil of Shadaab, the landmark restaurant famous for its biryani and other dishes.  Until  November8th card transactions were not encouraged calling it a hassle.  There were  even A4 printouts plastered on the door and the glass panels stating cards were not accepted.  “We have begun accepting card transactions for the last one year.   Yes, our business too has been affected by the current cash crunch as are all other businesses.   But we are better off than others as we were already doing most of our transactions on card. Even the way we have been forced to deal with banks waiting in queues has affected the business.  However, not everyone has a card and that clientèle is no longer patronising restaurants,” says the owner of a famous café in Basheerbagh.  The decision has been pushed due to demonetisation but due to the competition using app based services for delivery many restaurants were forced.  Two of the most popular cafes have been accepting card based transactions in certain sections of the hotels.  The snacks and bakery business is based on very small amounts like Rs.10 and Rs.20 so it cannot be expected to be made in card therefore the normal procedure would be continued.  The worst affected in going cashless is the waiters who will not be able to get tips.  “No one is leaving tips. People who would never open the flap to see the coins are removing all the change and pocketing it.   We are no longer getting tips.   Some of the patrons are promising that they will give the tip when they visit the next time.   But right now we are affected,” says a waiter at Bawarchi near RTC Crossroad.