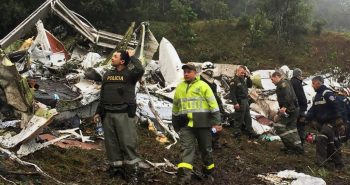 The pilot of the chartered plane that crashed in Colombia had radioed he was running out of fuel and in an emergency, according to a recording of his final communications.

The pilot repeatedly asked for permission to land because of “total electric failure” and a lack of fuel, before slamming into a mountain Monday during the flight from Santa Cruz, Bolivia, to Medellin, Colombia, according to the recording leaked to several Colombian media outlets.

The disaster on Monday night killed 71 people and sent shock waves round the global football world.

Investigators from Brazil flew in to join Colombian counterparts checking two black boxes and cockpit voice recordings from the crash site on a muddy hillside in wooded highlands near La Union town.