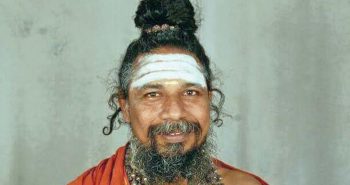 A 59-year-old godman, who has over 4,500 followers in social media platform Facebook, was arrested by Guduvancherry police in neighbouring Kancheepuram district for allegedly sexually assaulting a 24-year-old woman and later threatening her with dire consequences if she disclosed it to anyone.

The arrested man was identified as Annadurai alias Annamalai Siddhar of Aadisiva Brhamma Sivanadiyargal Ashram, located in Guduvancherry.
The incident happened in January, but the woman, mother of a 2-year-old boy, lodged a complaint with the police only two days back. She was suffering from migraines and had gone to his ashram along with her grandmother on the first day. Siddhar, after listening to her problem and family background, asked her to come the next day. She was allegedly sexually assaulted when she went there alone on the second day by the Siddhar.

“When she told him that she was going to expose him, Sidhar told her that he would use his ‘power’ to make her son a paralytic and send people to kill her husband. Fearing the Siddhar’s ‘power’, the woman never spoke about the ordeal she suffered all these days.

“Over a period of time, she had become depressed and started behaving abnormally at home. She was afraid that something would happen to her son if she tells about incident to her family members. After repeated questioning by her husband, who is a tailor, she finally informed him about the sexual assault. After consulting with his friends, the husband decided to lodge a police compliant. Based on the complaint, Guduvancherry police arrested Annamalai Siddhar and sealed his ashram.

Police disclosed that Siddhar, who is from Chennai, had set up ‘shop’ in Guduvancherry five years ago and had built a good following of devotees. His Facebook page shows many of his photographs with VIPs including one posing with former Puducherry chief minister N. Rangaswamy.