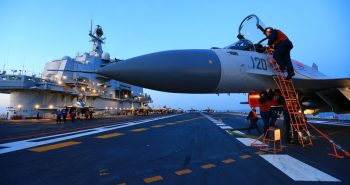 China’s Liaoning aircraft carrier battle group has conducted its first exercises with live ammunition, the country’s navy said, in a show of strength as tensions with the US and Taiwan escalate.

China’s military has carried out its first ever live-fire drills using an aircraft carrier led large –scale exercises in the north-eastern Bohai Sea close to Korea, the People’s Liberation Army Navy said late Thursday in a statement on their website.

The drills involved dozens of ships and aircraft in the carrier group and saw more than 10 air-to-air, anti-ship, and air defence missiles being tested, it said.

Footage on state broadcaster China Central Television showed fighters launching missiles and hitting targets, and one pilot wore a helmet with “SHOOT IT” written in English across the top.