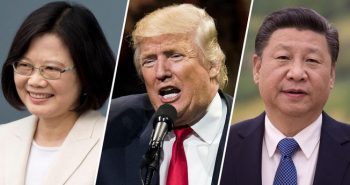 In a series of telephone calls with foreign leaders apparently eager to congratulate the president-elect, Trump has broken many of the rules that govern delicate matters of international relations, leaving State Department diplomats shocked and confused.

The 10-minute telephone call with Taiwan’s leadership was the first by a US president-elect or president since President Jimmy Carter switched diplomatic recognition from Taiwan to China in 1979, acknowledging Taiwan as part of “one China”.

China’s Foreign Ministry said it had lodged “stern representations” with what it called the “relevant US side”, urging the careful handling of the Taiwan issue to avoid any unnecessary disturbances in ties.

”The one China principle is the political basis of the China-US relationship,” it said.

After the phone conversation Friday, Trump tweeted that Tsai “CALLED ME.” He also groused about the reaction to the call: “Interesting how the US sells Taiwan billions of dollars of military equipment but I should not accept a congratulatory call.”