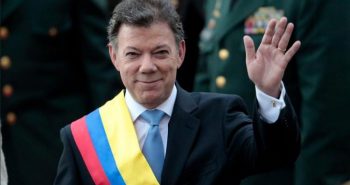 Colombian President Juan Manuel Santos was awarded the Nobel prize in Oslo for his role in the peace process to end the decades long civil war in Colombia.

Santos will be officially given the prize next Saturday for his efforts to end the internal conflict, lasting more than 50 years.

After almost four years of talks in Cuba with the insurgent Revolutionary Armed Forces of Colombia-PeopleÂ´s Army (FARC-EP), Santos and leader of that organization Timoleon Jimenez, signed a definite agreement on November 24th, pledging to end the conflict between the parties.

“I will accept the Nobel Peace Prize on behalf of all Colombians, but especially the victims of the conflict,” Santos said.

In Stockholm, where the prizes for literature, medicine, physics, chemistry and economics are traditionally awarded on December 10th.