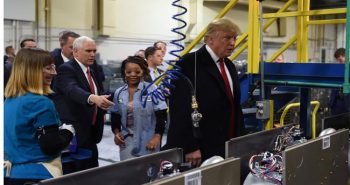 On his first official trip out of Washington and New York since the election, Trump ended up in the middle of Indiana. He convinced a major manufacturer in Indianapolis to keep it’s plant there, saving just over 1,000 U.S. jobs.

He visited the Carrier Air Conditional Plant. The corporation said it was taking the plant to Mexico and the jobs with it.

On Thursday, there was an applause as President-Elect Trump marched through the Carrier factory, looking into the eyes of some of the workers, whose jobs he saved by making a deal.

It’s a deal involving trading tax breaks and government incentives for the company’s loyalty to the U.S. economy.

“They can leave from state to state, and negotiate deals with different states, but leaving the country will be very, very difficult,” Mr Trump added.