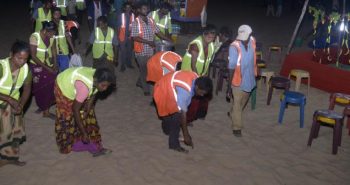 On Tuesday the police managed to remove most of the pro-jallikattu protesters.  Later the Chennai corporation removed a whopping 413 tonnes of waste from the Marina beach.  Past seven days garbage has been accumulated due to protest.  “Workers were unable to clean the beach for the past one week.  Rotting garbage increased risk of infection and many persons from the neighbouring slums reportedly have taken ill,” said a Corporation official.  Cases of infectious diseases have been spotted in the slums along the beach.  “People had to queue up for a long while to reach toilets.  But the facilities were inadequate,” said V. Meghanathan, a protester.  Initially Chennai corporation showed reluctance to provide toilet facilities during the beginning of the protest but later Chennai corporation had to install mobile toilets to reduce health risks .  More than 1473 conservancy workers  were involved in the cleaning on Tuesday.  Around 80  lorries were used to transport the waste to the dump.  Many things that have  been damaged along the beach are being restored.  Corporation workers are trying to restore the greenery along the garden.