Cows across India should get Unique Identification Number: Centre to SC 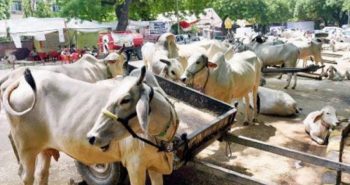 The central government on Monday, in its report to the Supreme Court, proposed that all cows across the country should be given an Unique Identification Number for tracking.

The Centre made the proposal in a report it submitted to the apex court on cow protection and smuggling of cattle across India-Bangladesh border. The report was prepared by a committee headed by Joint Secretary, Home Ministry.

The BJP-led government, in its report, also stated that the state governments are responsible for the safety and care of abandoned animals.

“Each district should have a shelter home of capacity of at least 500 abandoned animals. Will help reduce smuggling,” the report said. It has also recommended special care for cattle beyond age of milking.

The Centre has also been considering a proposal to set up ‘cow sanctuaries’ in every state, on the lines of tiger sanctuaries created for protecting the endangered animal, to end cow slaughter in the country.

Ahir said that a ‘Project Cow’ like ‘Project Tiger’ could be started and this would also stop farmers from selling off old cows.