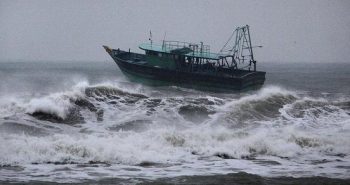 Rains lashed several parts of Tamil Nadu on Thursday influenced by cyclonic storm Nada, which is likely to cross the coast near Chennai in the early hours of Friday. Many parts of the state were put on high alert as the state government and the National Disaster Response Force (NDRF) prepared ahead of the cyclonic storm.

Nada is now seen as a weak depression that lay centered over 290 km south-southeast of Chennai and 210 km southeast of Puducherry.

“The system is very likely to continue to move west-northwestward, weaken further gradually into a depression and cross north Tamil Nadu coast between Vedaranniyam and Puducherry, south of Cuddalore by early Friday,” the weather department said.