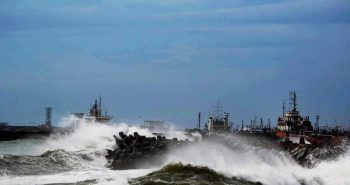 Authorities on Sunday sounded an alert in Andhra Pradesh and adjoining Tamil Nadu as cyclonic storm ‘Vardah’ over the Bay of Bengal has turned into a “very severe” one.

According to Indian Meterorological Department, the storm is likely to cross north Tamil Nadu and south Andhra Pradesh coast by Monday afternoon with a wind speed of 80-90 kmph, gussing to 100 kmph.