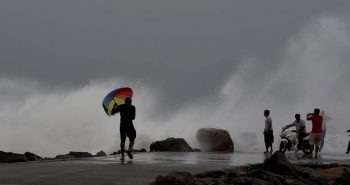 NDTV reports that cylcone Vardah is nearing the Tamil Nadu coast and is somewhere between Sriharikota and Chennai. Navy, Indian Airforce and Army teams are on stand by. The speed of the wind is over 100 kms/per hour. Trees are also reportedly uprooted across Chennai city. Heavy rain fall is also likely for the next two hours.

Meanwhile people have been asked not to step put between 1 pm and 4 pm.

NDTV reports that the cyclone Vardah landfall is likely to happen at 1:30 pm. As of now 50 flights have been delayed or diverted.

With seas being rough, the MeT Department has asked fishermen not to go out into the sea for the next 48 hours.

According to ANI reports, Andhra Pradesh Chief Minister N. Chandrababu Naidu has said that he is monitoring the situation in the state. Meanwhile, NDRF has deployed 19 teams in Tamil Nadu and Andhra Pradesh.