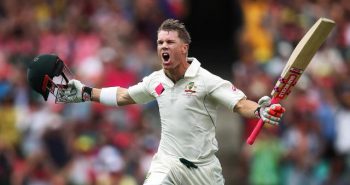 David Warner became the first cricketer to smash a century before lunch on the first day in a flying start to the third Test against Pakistan on Tuesday.

The opener made a 100 off just 78 balls in 118 minutes against Pakistan in the third Test at the Sydney Cricket Ground.

At lunch in Sydney, Australia were 126 without loss with Warner hurtling along on 100 off 78 balls with the more sedate Matthew Renshaw on 25 off 84 balls.