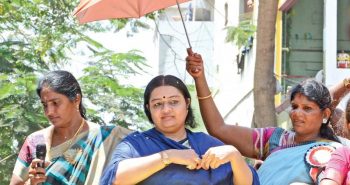 The electioneering by Deepa Jayakumar faced some ‘tough’ weather in RK Nagar on Thursday as the claimant to the Jaya legacy beat a retreat from the morning sun and chose to campaign from the air-cooled comfort of her car. Her supporters stepped up their lung power to compensate for the disappearance of their thalaivi from the scorching open van.

The roads in Tondiarpet had been clogged with Deepa campaigners and their many vehicles from early morning Thursday as it was announced that she would begin her electioneering at about seven o’çlock.

Arriving late by at least a couple of hours late, she first began her campaign atop the open van but soon fled to her car that had been following just behind. She sat in the front seat and with the windows rolled up for cool comfort, her greeting with folded hands was hardly noticed by the crowds on the street.

Realising that her effort to ‘reach out’ to the voters was not getting anywhere, Deepa climbed back on to the campaign van. A woman party worker was quickly deployed with an umbrella to protect the leader from the sun.

Wouldn’t Say “Such A Stupid Thing”: Imran Khan Backtracks On His Rape Remarks

“I’m No Astrologer”: Mamata Banerjee On Who Will Lead United Opposition

“Freedom, Equality At Core Of Our Ties”: Blinken To India