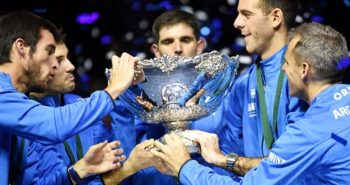 Delbonis dropped to the ground after his 6-3, 6-4, 6-2 victory. His teammates fell into each other’s arms and celebrated in front of thousands of Argentine fans in the packed Arena Zagreb.

“This is fabulous. This is one of those dreams that has come true,” Delbonis said. “We somewhat felt we could do it despite trailing after the doubles.”

“I tried to keep focused to do what I had to do, that’s all I could think because if I thought about anything else it would be a disaster.”

“I’m very happy to hand my team a chance of a victory,” Del Potro said.

This was the first Davis Cup title for Argentina in the fifth final it has played since 1981. Croatia won in 2005.