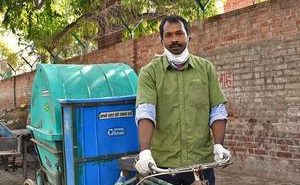 In Delhi a waste collector at Pandara road by name Mohammad Hamid Ali finishes his work by noon and sits down to take a phone call.  It is from his eldest daughter Haleema from Assam who has scored 100%in her class 9 Arabic exam.  Other subjects results will be expected in a couple of days.  It is good news for 39 year old Ali who hope his children would get good jobs.  The waste the residents throw away is funding the education of Mr.Ali’s three children.  He is from Assam and reached Delhi in1999.  “When I was a kid, I saw my house and all the land my father owned submerged in floods. Overnight, it became part of the river and we moved away to stay with my grandmother. We were poor but found jobs to ensure that we were never hungry. Education, however, was a distant dream,” he said.   He hopes his children would be educated  by just  collecting waste and selling it.