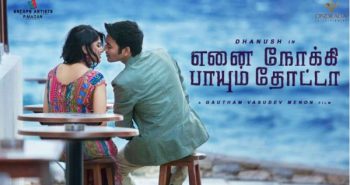 The posters of the film received the superb response and increased curiosity to watch the official teaser. The production they will releasing the teaser of the venture on the 6th of December but then the launch was postponed due to the difficult situation in the state at that time.

And now as an exciting news the team has announced that they will be releasing the teaser on the 24th of December at 8.30 PM as Christmas special.

ENPT features Dhanush, Megha Akash and Rana Daggubati in the lead roles. The film is bankrolled by p Madhan and Gautham Menon under the banners of Escape Artists Motion Pictures and Ondraga Entertainment.