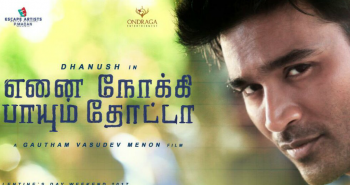 Director Gautham Menon’s ‘Enai Noki Paayum Thota’ touted to romantic thriller features Dhanush and Megha Akash in the lead roles. P. Madan and Gautham Menon jointly produced the film under the banners, Ondraga Entertainment and Escape Artists Motion Pictures.The Cinematography is handled by Jomon T. John and Edited by Anthony. The team has completed almost 90% of the shoot with their last schedule.

The latest update about the venture is that the Tamil Nadu distribution rights of the film has been bought by the famous ‘K Productions’ for a record price, the price of the deal is Rs. 19 crore. The sources have stated that this is the biggest for a Dhanush movie.

The same K Productions banner will also be involved in the Tamil Nadu distribution of ‘Baahubali 2’ and ‘Viswaroopam 2’.

‘ENPT’ is expected to hit the screens around Simmer 2017.