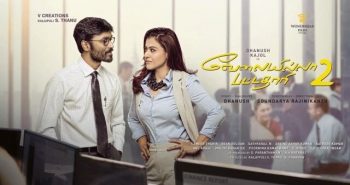 After the customary pooja and photo shoot in December, the official shoot of Dhanush’s Velai Illa Pattadhari 2 starts rolling today (January 4). The makers have unveiled a motion poster to announce the commencement of filming.

“S First day shoot in year 2017 … do bless us … #VIP2 #RaghuvaranIsBack. [sic]” director Soundarya Rajinikanth shared her excitement of starting the shooting on Twitter. The news has been welcomed by the fans of Dhanush who are wishing the young team all the success using ‘#raghuvaranisback’ hash tag on Twitter.

The film features Dhanush, Kajol and Amala Paul in the lead roles, while , Samuthirakani and Saranya play supporting roles. Kajol reportedly plays the antagonist and her face-off scenes with Dhanush will be one of biggest highlight of the film. The film is produced by Kalaipuli S. Thanu under the banner, V. Creations. Sean Roldan composed the music of the film.

Velai Illa Pattadhaari 2 aka VIP 2 movie entirely new story, which has been written by actor Dhanush. This film hit theatres in late 2017.