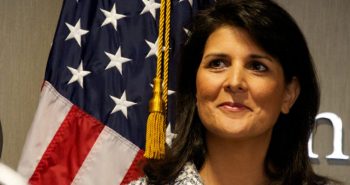 US President-elect Donald Trump is picking South Carolina Gov. Nikki Haley to become his U.S. ambassador to the United Nations

The daughter of Indian immigrants, she was the first non-white nominee to Mr Trump’s cabinet and is one of the best known female Republican officials.

The move, which will be announced later today, comes as Trump advisers are seeking to diversify his ranks and marks his first female appointment to a cabinet-level post, The Washington Post reported.

While she will head to New York in January, there may be a big job in Washington in her future.

The Trump administration is likely banking on Haley’s strong communication and problem-solving skills in being the U.S. representative at the 193-member United Nations in New York.