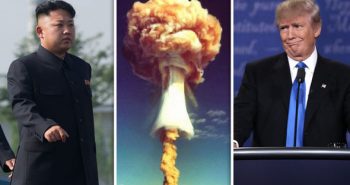 US President-elect Donald Trump responded to North Korean leader Kim Jong-un’s  Sunday announcement that his country’s military is in the final stages of testing its first intercontinental ballistic missile.

“North Korea just stated that it is in the final stages of developing a nuclear weapon capable of reaching parts of the U.S. It won’t happen!” Trump posted in his official Twitter account.

“China has been taking out massive amounts of money & wealth from the U.S. in totally one-sided trade, but won’t help with North Korea. Nice!” Trump wrote.

The President-elect launched his verbal missiles after the autocratic 32-year-old North Korean leader declared in a televised New Year’s Day speech that his military is on the brink of testing its first intercontinental ballistic missile: a rocket that can be equipped with nuclear weapons and is powerful enough to reach any part of the US.