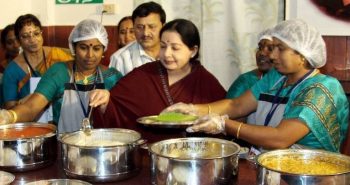 Around 407 Amma canteens has been affected this summer.  The reason the supply of potable water is affected owing to the damage to infrastructure in most of the 407 facilities in the city.  Many of them were affected during Cyclone Vardah.  Water purifying facilities are in shambles and the yield from borewells has comedown.  Metrowater has stopped supply in pumps and at present water from unsafe sources are being provided to Amma canteen workers.

“The quality of water has deteriorated in the canteen in our neighbourhood,” said a resident of GKM Colony.  The Barath Rajiv Gandhi Nagar canteen’s water is also unsafe claimed the residents.  Many canteens in the city like Egmore,Adyar, Anna Nagar, Korrukupet, Tondiarpet, Ambattur and Teynampet are unable to get access to safe drinking water.  Owing to irregular  Metro water supply normal operations have been affected in more than 50% of the canteens in various parts of the city.  Canteen workers have to walk 50 metres to get water for the canteen.

Bore water supply is the source for more than 100 canteens.  “Some Amma Canteens are unable to source water even for cooking,” said an official.  Metrowater has stopped giving water to private operators.  Even commercial supply to hotels has been reduced.