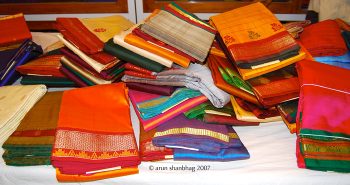 Karnataka’s handloom weaver’s symbol was Priyadarshini Handlooms . They sold saris which was long lasting but now it is on a decline. Karnataka Handloom Development Corporation (KHDC) is more than a four decade old unit and hopes to achieve sales through e- commerce sites. In the online e-commerce site amazon.in the company has got registered and sales began in the last seven days.  “We have listed 100 varieties of saris to the Amazon godowns, with the intention of sending as many as 500 varieties of saris soon,” says Ramachandra, MD, KHDC. Range of the saris are between 6,000 to 12,000. Based on the response, for access to an export market it should be registered with Amazon.com. Export process has been stopped for many years. A spokesperson said  “Priyadarshini Handlooms saris may not have new designs, but there is a strong, nostalgic value and sense of quality. To strengthen this emotional connect between the brand and the weaver, we want to include a custom note with information about the weavers who have made the sari, their life stories, and the specialities of the sari. We want to drive home the point that since these are handwoven, no two designs are the same,” he said.