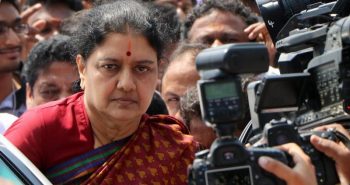 VK Sasikala, who is serving her jail term in disproportionate assets case, is probably staring at further trouble even as the Election Commission has cancelled the RK Nagar bypolls following allegations of rampant corruption and bribery in AIADMK (Amma).

The Election Commission (EC) will examine the validity of her appointment as interim general secretary of AIADMK after the death of former chief minister J Jayalalithaa, NDTV quoted its sources as saying.

The EC has at least three months to look at her appointment as the new polling date will be released only after that.

Bypoll in Chennai’s RK Nagar constituency, which was scheduled to be held on April 12, was cancelled after cash-for-votes allegations surfaced. The decision came after Income Tax raids in Chennai found money was distributed to voters.

The Income Tax officials had alleged that the VK Sasikala faction of the party paid Rs. 89 crore to voters to buy support for its candidate TTV Dinakaran, who is also her nephew. As evidence, the department had cited documents seized during raids on Friday in more than 35 places – including properties of the state health minister C Vijayabaskar.

TTV Dinakaran of Sasikala faction has called the decision ‘undemocratic’, while the BJP and the Panneerselvam faction have praised the EC verdict.

“It is a wrong decision by the Election Commission. I don’t know the reason (why they are doing this) maybe even the EC does not want me to win so they are trying to postpone the polls. It is undemocratic,” TTV Dinakaran of AIADMK (Amma) told ANI.

“I thank the Election Commission for reacting to my letter which I have given as a complaint on this issue day before yesterday. This election is not being handled in a free and fair manner that’s why the Commission had to intervene. Constitutionally it has been proved that our democracy is alive by this decision,” expelled AIADMK MP Sasikala Pushpa told ANI.

“The Election Commission should conduct the elections only if they assure a free and fair election. If they are unable to do so then let them cancel the elections,” she said.

The by-elections in RK Nagar became necessary after the death of former chief minister J Jayalalithaa, who represented it for two terms. Stakes for the by-polls were very high as the results would have been a verdict of sorts in the war between the two rival factions of the ruling AIADMK.