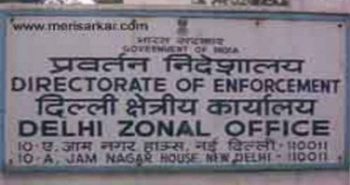 In a very shocking incident, the Enforcement Directorate has arrested two bank managers from Axis bank after they acted as mediators for converting black money into white, in lieu of a gold brick.

Officials identified the two managers as Shobit Sinha and Vineet Sinha, working as managers in the Kashmere Gate branch of Axis Bank here, and said they were arrested on Sunday night under the provisions of the Prevention of Money Laundering Act (PMLA).

They would be produced in a court on Monday for further custody, they said.

A gold bar, part of alleged kickbacks payment given to the bankers, had been seized by the agency from a location in Lucknow, they said.

The Axis Bank issued a statement saying: “The bank is committed to following the highest standards of corporate governance and has zero tolerance towards any deviation on the part of any of its employees from the set model code of conduct. In this particular case, the bank has suspended the erring employee and is cooperating with the investigating agencies.”