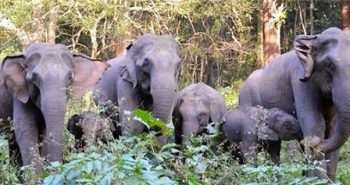 On Tuesday the elephant camp at Varagaliyar had a surprise visitor.  From Karamadai a three year old elephant was captured and released inside a forest at Topslip.  But at present it is roaming near the elephant camp at Varagaliyar.  The plans of lodging the male elephant inside the wooden enclosure and to tame it to a Kumki as it is returning to human habitation after being released in forest needs to be finalized.  At the chadivayal  elephant camp the calf was treated for a month for inflammation of its oral cavity.   The elephant was captured from forest staff quarters near Mangarai Reserve Forests Rest House on March 14 following repeated complaints of raiding houses and human habitation at Mangarai, Thadagamn and Kanuvai areas.  The calf had to be captured again when it raided a house in the early hours of Sunday.  The elephant was later transported in a lorry to topslip and released in forest hoping that the animal would join one of the elephant herds there.  But it returned to the elephant camp Varagaliyar.  “It was seen mingling with the kumki elephants at the camp on Tuesday.  The elephant does not seem to join a herd as it is used to human habitation,” said a Forest officer.  The calf which was relocated to a distance of more than 100 km is being observed by senior veterinary surgeon N.S.Manoharan  at the camp.  At Mangarai the calf was roaming with its mother.   As of now, elephant camps at Chadivayal in Coimbatore, Varagaliyar at Topslip of Anamalai Tiger Reserve and Theppakadu at Mudumalai Tiger Reserve in the Nilgiris have adequate number of kumkis to handle man animal conflicts.

Driven by a passion for animal welfare