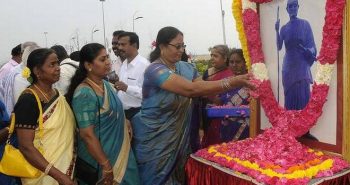 In Besant Nagar Elliot’s beach on Wednesday ,a group of men portraying the role of women victims of harassment in the recent past approached other men at Elliot’s beach.  To ensure women’s security and gender equality a pledge was taken.  International women’s day was observed in Chennai in a unique  way.  Ten volunteers planned the novel campaign to create awareness and raise support against violence meted out on women said Govind Murugan a convener of Dhagam Foundation a voluntary organization.  Based on women empowerment a street play was enacted .  There were many panel discussions human chain and other celebrations.  Fortis Malar Hospital launched an All women’s clinic which comprises all women team of physicians and medical staff members in the fields  of gynaecology,internal medicine ,dermatology and psychiatry.   Obstetric and Gynaecological Society of Southern India and Aakash Fertility Centre and Hospital organized a human chain to condemn growing atrocities against women.  Many issues like honour killing ,work place harassment and early marriages were discussed during the day.  Panel discussions was inaugurated by actor Madhavan and U.S.Consulate General Ariel H. Pollock.  Dipika Pallikal,Karthik,boxer Thulasi and athelete Rochelle participated.   23 women employees were honoured by southern railway for their outstanding performance