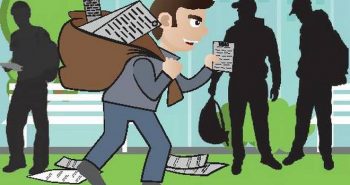 In a small office in West Delhi Janakpuri ,fake degrees are being issued.  Around 2000 doctors ,engineers and researchers are suspected to be working as professionals or pursuing courses.  Police identified the 3 accused  and seized 200 printed fake degrees along with computers that had many more soft copies.  Four men who posed as consultants with clients inBihar,Haryana,Punjab and Delhi were arrested .  “From CBSE certificates for Classes X and XII to those pursuing PhD or medicine, they would offer many degrees, charging between ₹ 5,000 to even ₹ 5 lakh,” said DCP (West) Vijay Kumar.  Though no fake degrees holders were arrested ,they may be practicing  medicine illegally in tidy village where chances of getting caught are low.  Things came to light when Shahbazul Haque(27) contacted the main accused for class ten admission.  “He was initially told that he would be provided the certificate after undergoing brief training and then appearing for the board exam via distance education. However, he was given the certificate and told that he did not need to write any exam,” said Mr. Kumar.   Rupesh sent him the certificate on WhatsApp, “issued by the Intermediate Schooling Council of Education [ICSE]”.   The date of issuance was 2003 and he was shocked as he did not live in India in 2003.