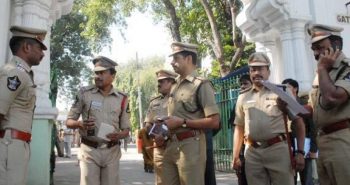 It was sad ending for a family of Erode,of a 30 year old woman on Friday.   She was working as a manager in a private bank at Vellakoil.  She and her parents committed suicide  by consuming poison at their residence.  The deceased were identified as Manoharan (60) from Manguzhi in Palakkad, his wife Radhamani (55) and daughter Kiruthika.  A note has been left behind by Manoharan(60) who said the reason for suicide could not be explained.   When the milkman found door locked morning and evening ,despite him calling out he alerted the neighbours.  The family  was found dead with frothing at the mouth.  Neighbours had told the police that Kiruthika’s engagement was to take place on February 6th with a relative.  Later the post mortem was conducted at the  Government Head Quarters  Hospital.  A case has been registered by the Modakurichi  police.  There is a NGO helpline for persons feeling suicidal.  They can call in its 24 –hour helpline number 044-24640050.