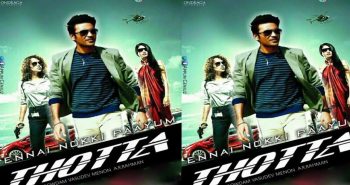 This is the first time Dhanush and GVM joined together in Kollywood. Both are the busy artist.

The makers of Dhanush-starrer upcoming Tamil romantic actioner “Ennai Nokki Paayum Thota”, have confirmed that the films first look will be unveiled next week.

In an official poster, it was shared that the first look of the film, which is being helmed by Gautham Vasudev Menon, will be released on November 27.

GVM tweeted through the official handle of Ondraga Entertainment, that the first look release is scheduled to be launched on the 27’th of November.

AR Rahman is the music composer. The cinematography was taken by Jomon T. John and editing was taken by Anthony. Escape artist motion picture will distribute this movie.