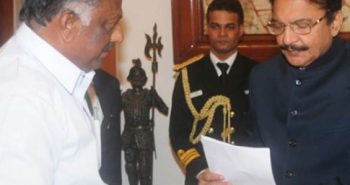 The governor called OPS to prove his strength in the parliament and not only that he’s also going to take votes from the MLAs who wish OPS to continue, and if that fails then “Temporary” General secretary of ADMK Sasikala will get her chance to prove her power in the parliament but she haven’t talked or watched a parliament speech before so OPS side is becoming strong and this is strongly believable rumor.