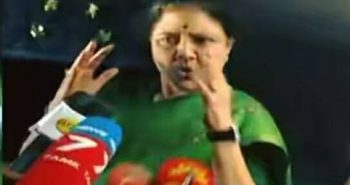 Just now ADMK’s Presidium leader Madhusudhanan was removed from his post and not only that he was alos removed from the basic member of admk, by the “temporary” general secretary of ADMK Sasikala after he supported OPS Sasikala have taken this action and this make OPS side angry and they also said that She’s just a temporary general secretary and she’s don’t have the rights to dismiss anyone from AIADMK.