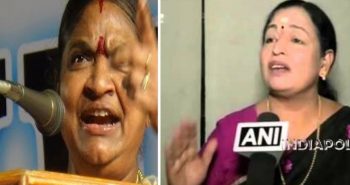 As people supporting OPS, Sasikala side keep trying their best to make everyone to oppose OPS in this action yesterday C.R.Saraswathi gave an interview and said that many phone calls were coming to her and they scolds her in bad words(Green and Green / as she mentioned).

Now in an another interview she said that OPS himself calling her and making threats to her, but people knows how both CRS and Valarmathi are effeicient with words.

Both of them were expert at creating sentences and opposing the opponents now these two debate legends telling that they were threatened in a phone call as usual again people trolling funny Sasikala and her side.