Flash NEWS : Police burst into resort to save the MLAs:- 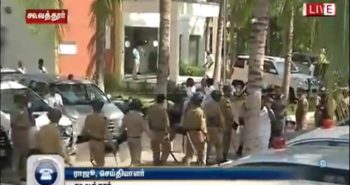 After the complaint that nearly 100 MLAs were kidnapped and kept as prisoners in the resort without our own wish which was given by Madurai MLA Saravanan a FIR was registered and the investigation is going on and the next action special police force burst into the resort.

Will the police force save the MLAs and arrest Edapadi Palanisamy.