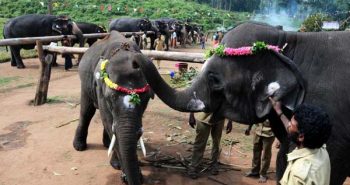 In Coimbatore district the arrangements are about to get completed for the temple and mutt elephants for the 48-day long rejuvenation camp , although the official machinery appears to be waiting for orders to inaugurate the camp.  This pet project was introduced first in2003 by former ChiefMinister J.Jayalalithaa and was not held only from2006 to 2011 during the DMK regime.  As per plan the camp  may commence on February 9.  It is in the foothills of Nilgiris at a cost of a  little over 90 lakh,the arrangements have been completed.  It is set up in the sprawling six acres of land along the banks of the River Bhavani.  About 30 elephants from various temples and mutts in Tamilnadu will visit the camp.  The elephants from the Manakula Vinayakar and the Thirunallaru temples will be two guests from Puducherry.  The first four camps were held  at Theppakadu in Mudumalai and the ninth such camp is also the fifth organized at Thekkampatti in Mettupalayam.  It is a tiring uphill journey for the elephants.  They come from various temples across the state ,so the venue was shifted to Thekkampatti  which is more scenic.  A massive kitchen for the jumbos is a part of arrangements.  Another one is for the mahouts and cavadis and they undergo rejuvenation and receive medical aid.  There is a walking track for the jumbos.  As per their gender ,age and weight  they walk for a minimum of one round and a maximum of three rounds.  The place already has resting sheds and toilets.  To prevent elephants getting from entering the river large showers have been put up.  There is a three tier security arrangement made to prevent elephants from entering the campsite that include a hanging solar powerfence,a barbed wire fence and the closure of unauthorized entry points with barricades and tin sheets.