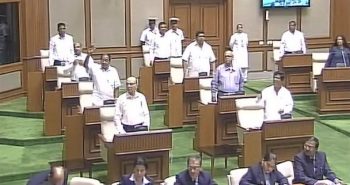 A special Assembly session was convened for the purpose. Congress MLA Vishwajit Rane abstained and walked out of Assembly during trust vote. Congress could only manage to sway 16 votes.

Parrikar, who stepped down as Defence Minister, was sworn-in as the Chief Minister of the coastal state for the fourth time on Tuesday evening, along with nine ministers.

After winning the trust vote, Parrikar said, “We have proved before the people of India, we had the support of 23 and we proved it on the floor of House. Digvijaya Singh’s claims that they have numbers debunked. They didn’t have numbers right from the beginning.”

“We had 23 MLAs with us, all stood by us. 22 voted in our favour, the Speaker, who is from our party could of course not vote,” said Parrikar.

Parrikar said that it is a government of coalition and that decisions will be taken by the coalition on appointing a deputy CM.

He also said that a cabinet meeting has been scheduled for Friday.

The BJP had bagged 13 seats in the polls. Congress had won 17 seats.