GST Bill debate: Centre, states will have to work together, says Jaitley 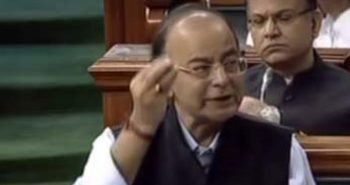 Finance Minister Arun Jaitley tabled the Goods and Services Tax (GST) Bills on Wednesday in the Lok Sabha, opening the debate on the much awaited bill, eyeing a July 1 launch.

Eight hours have been allotted by the Speaker for discussions on the tax reform bill.

Calling the bill revolutionary, Jaitley said the change would benefit all. “12 meetings of the GST council were held to make it a process based on consensus and recommendations,” the Finance Minister said.

Here are the highlights:

GST Compensation bill will ensure compensation to states for the first five years of GST rollout… Cess over 28% to go into a compensation cess fund that will be used to compensate states,

Jaitley announces pending GST rules to be finalised by March 31.

The GST council has been empowered to fix GST rates… The council has held 12 meetings so far and it has sent its recommendations for five GST laws.  We are now creating by law a jurisdiction both in the states and the Centre

The objectives of the four GST bills are same. The idea was to have a consolidated tax for states and the country. The uniform tax (GST) is aimed at replacing multitude of local and central taxes, said Jaitley.

The CGST Bill makes provisions for levy and collection of tax on intra-state supply of goods or services, the integrated GST deals in taxation of inter-state movement of goods and services while the Union Territory GST Bill covers taxation in Union Territories.

The compensation bill has been drafted to give a legislative backing to the Centre’s promise to compensate the states for five years for any revenue loss arising out of GST implementation.

Once these Bills are cleared by Parliament, the states will then take up the state GST Bill in their assemblies. S-GST bill has been prepared as a model of the central GST, with each state incorporating state-specific exemptions.

Jaitley said the GST bills are based on the principle of shared sovereignty and that the government wants to pass these landmark tax reforms through consensus.

The meeting was also told that the new legislations will usher in a one-nation one-tax regime.

The government has set a target of first of July for rollout of GST, which will subsume excise, service tax, VAT and other local levies.