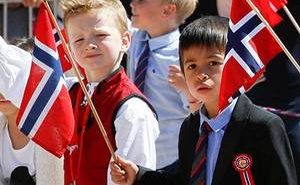 Norway is named the world’s happiest country on Monday.  It’s a chilly climate there.  As per the world Happiness Report 2017 it went all the way to the top  from fourth place in last year’s UN assessment.  The Nordic neighbours Denmark and Iceland were the other top countries in the list.   “All of the top four countries rank highly on all the main factors found to support happiness: caring, freedom, generosity, honesty, health, income and good governance,” the summary explained.  Rounding out the top 10 were Finland, in fifth place, the Netherlands (6), Canada (7), New Zealand (8), and Australia and Sweden tied for 9th.  The entire top 10 were affluent, developed nations, although money is not the only ingredient for happiness, the report said.  In fact, among the wealthier countries the differences in happiness levels had a lot to do with “differences in mental health, physical health and personal relationships: the biggest single source of misery is mental illness”, the report said.  In recent years it is another major country China that has made major economic strides.  The report found its people are not happier than 25 years ago.  Out of the 155 countries China ranked 79th in the study.  Norwegian Prime Minister Erna Solberg welcomed the report as “a nice validation on a Monday morning”.  On the International Day of Happiness ,United Nations released The World Happiness Report 2017.  The 1st report was published in 2012 and this is the fifth such report.