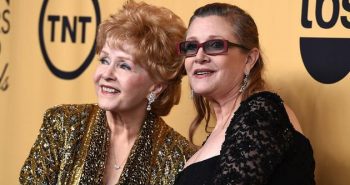 Hollywood stars and fans have paid tribute to Hollywood icon Debbie Reynolds. The 84-year-old was a talented actress and singer as well as the mother of the late Carrie Fisher, who died on Tuesday.

Debbie Reynolds has been rushed to a hospital for a medical emergency and she died on Wednesday afternoon, with her son Todd is confirming the tragic news. It comes less than 24 hours after her daughter Carrie died of cardiac arrest at age 60.

Hollywood celebrities remembered the iconic star best known for her roles in musicals “Singin in the Rain” and “The Unsinkable Molly Brown”.

Close friend Carol Channing wrote: “She was beautiful and generous. It seems like only yesterday she was having lunch here at the house and we were discussing the possibility of working together in a new show.

“I have such fond memories of appearing with her here at the McCallum Theater in Palm Springs. So many laughs. My prayers go out to the family. She will be missed.”

Added Reynolds’ costar Rip Taylor: “I was blessed to work with this remarkable woman for 45 almost 50 years. That makes for a very rare bond and unique relationship. She was generous to a fault, never caring who got the laugh from the audience. I Will always love her. I am absolutely devastated tonight!”

Albert Brooks wrote: “Debbie Reynolds, a legend and my movie mom. I can’t believe this happened one day after Carrie. My heart goes out to Billie.”

Larry King wrote: “Debbie Reynolds was pure class. She was loving, talented, beautiful, unsinkable. I feel sorry for anyone who never got a chance to meet her.”

Star Trek actor George Takei joined the many voices on social media, as he wrote: “There is nothing harder than having to bury a child. Debbiedied of a broken heart, but she’s with her daughter now.”

Joan Collins tweeted: “Truly heartbroken to hear @DebbieReynolds1 has died. She was a wonderfully warm friend and colleague. Praying for Todd & Billie. #RIPDebbie.”

Ricki Lake wrote, “That is the saddest thing. So sorry for the whole family. Rip CarrieFisher and DebbieReynolds.”

While Corey Feldman added: “FEW B4 HER, OR THE FEW WE SHALL EVER C AGAIN! NOW HER & HER DAUGHTER CAN SOAR 2GETHER IN GODS GR8 VAST KINGDOM! R.I.P. DEBBIE REYNOLDS”

While Ellen DeGeneres added: “I can’t imagine what Carrie Fisher and Debbie Reynolds’ family are going through this week. I send all of my love.”

Debbie Allen wrote, “Debbie Reynolds, God is holding you and Carrie in his hands. We will always speak your name.”

Debra Messing wrote: “So heartsick. Debbie went to be with Carrie. It’s such a devastating 1,2 punch. She was my “mom” for years & I loved her dearly. A legend.”

William Shatner wrote: “Debbie Reynolds was one of the last of Hollywood Royalty. It breaks my heart that she is gone. I’d hoped that my grieving was done for 2016.”

A number of other celebrities have taken to social media to pen tributes for the late Hollywood star.