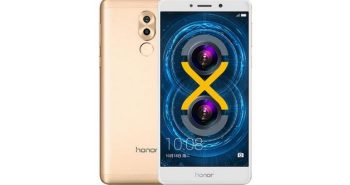 The Honor 6X features a 5.5-inch full HD 1080p IPS display with 2.5D curved glass on top, and it is powered by a Kirin 655 octa-core processor paired with Mali T830-MP2 GPU. Both variants come with a hybrid dual-SIM card slot, which can be also be used for a microSD card.

The rest of the features include a fingerprint sensor at the back that is fast enough to unlock the device in 0.3 seconds, and a 3,340mAh battery with fast charging support. Connectivity options include dual-SIM card slots (hybrid setup), 4G with VoLTE support, Wi-Fi 802.11 b/g/n, Bluetooth 4.1, and GPS. On the software front, the smartphone runs on Android Marshmallow 6.0-based EMUI 4.1, which will soon be updated to EMUI 5.0.