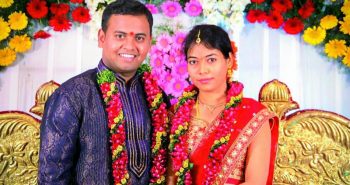 The wife of a Google techie ended life on their first wedding anniversary due to alleged dowry harassment by her husband and in-laws.

C. Bhagyalakshmi, 30, an employee at Atomic Minerals Directorate (AMD), had lodged a complaint at the Begumpet Women’s Police Station alleging that her husband had threatened to put her nude photographs online if she did not pay additional dowry.

Her husband, S. Shashidhar, also asked her to give him her entire salary, the victim’s parents alleged. Bhagyalakshmi hanged herself at the AMD quarters in Begumpet on Saturday evening leaving a suicide note describing the pain she went through.

The police has booked a dowry death case against husband Shashdhar and his parents. Shashidhar has not yet been arrested.

On Saturday, the victim’s parents came to see her at the AMD quarters. Though they knocked several times, she did not open the door. Later, they broke open the door, found her hanging and called the police.

Bagyalakshmi and Shashidhar got married a year ago after a love affair that lasted five years. Shashdhar’s parents had opposed the marriage. Soon after the wedding, differences erupted as Shashidhar used to abuse her after getting drunk. He had shot a few intimate videos and photographs using his phone and started blackmailing her.

Husband was ‘alcoholic’
Shashidhar’s parents and sister looked down upon Bhagyala-kshmi after the wedding as she was elder to him and belonged to another caste. Six months after marriage, Bhagyalakshmi had to start living separately due to harassment by her in-laws, Bhaskar Rao and Manjula.

Later, they asked her to pay lakhs as dowry. Bhagyalakshmi asked Shashidhar to live with her at the AMD quarters. But he refused and “started blackmailing her.” Bhagyalakshmi’s father Krishna said that Shashidhar, a drunkard, used to torture Bhagyalakshmi.