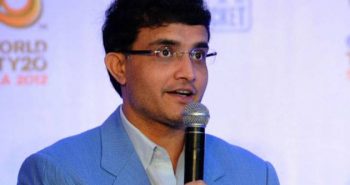 As per the reports after the removal of Anurga Thakur from the president’s post, former Indian captian and Cricket Association of Bengal president Sourav Ganguly is emerging as the strong contender to take over as new BCCI president.

“BCCI has got a very good bench strength to take up the bigger roles and one name that comes to my mind is Sourav Ganguly,” said Gavaskar as reported by NDTV.

Dismissing the suggestion that he was running for the post of BCCI president, Ganguly said at CAB office: “My name is coming up unnecessarily. I don’t qualify. I have just completed one year (as the CAB president) and have got two more years left. I am not in the running (for the BCCI president’s post).”

Asked whether the CAB would implement the Lodha Committee’s reforms, Ganguly said, “We are having an office-bearers’ meeting tomorrow where we will decide on the future.

India vs Sri Lanka: Players assemble in Mumbai for mandatory quarantine ahead of limited-overs tour