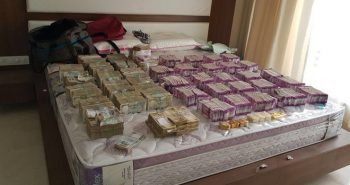 A search action by the Investigation Directorate, Bangalore, was initiated yesterday in the case of two engineers and connected persons with premises in Bangalore, Chennai and Erode.

During the course of searches, Rs. 4.7 crore cash in new denominations of Rs. 2000/- and 0.3 crores in old/smaller denominations totalling to Rs. five crore. Also, 7 kg gold bullion, worth approximately Rs 2 crore was found in the contractor’s house.

“Huge stacks of Rs 2000 notes have been recovered. The cash amounts to over Rs four crore. The counting of the seized currency is still on. This is one the highest seizures of the new currency. Some entry operators and bankers are under the scanner,” a senior I-T Department official told news agency PTI.