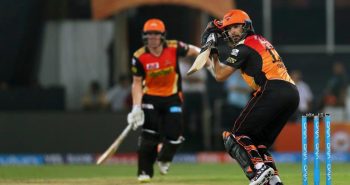 Sunrisers Hyderabad captain David Warner says if Yuvraj Singh continues his rampaging form in the tournament they have every chance of defending their Indian Premier League title.

Warner was all praise for Yuvraj, who played a swashbuckling 62-run knock to help Sunrisers beat Royal Challengers Bangalore by 35 runs in the IPL 2017 opener here on Wednesday.

“If he can do that another five or six times in the tournament we will easily make the final and can also win,” he added.

Warner hailed the entire Sunrisers team for putting up a fantastic performance yesterday.

“A great start. We take lot of confidence from the win. Before the game we had some pressure because we are defending champions. But the way we came out and played it was fantastic. Our middle-order and top-order were fantastic. 200 on this wicket was a good score.

“While defending there were a few nerves in the middle but we needed just one wicket. It was Fantastic a all-round effort,” he said.

Warner was also happy to see Shikhar Dhawan scoring some runs on the board at the top.

Dhawan, who was inconsistent in the last IPL, scored valuable 40 runs while opening the batting. Warner also hailed the performance of Afghanistan leg-spinner Rashid Khan for his impressive IPL debut.

Rashid, the first Afghan cricketer to play in IPL, returned with impressive match figures of 2 for 36 that included the wickets of Mandeep Singh and Travis Head.